Hellooo and welcome to my blog.

After a week of nonstop reading, the Reading Rush has ended and not to toot my own thorn or anything but I did great.

In the last week I have completed 5 book and a sum total of 1779 pages. I’m pretty impressed with that. *pats self on back*.

I normally start Readathon’s bang on midnight and that was my original plan but instead I finished work and started drinking pints. I didn’t get in till 2am so reading even just a chapter was out the window. So was reading when I woke up like I wanted because I’m gonna admit I was slightly hungover and decided to sleep another hour.

Later that day though I did ended up completing Darkling by Brooklyn Ray for the challenge: Read the first book you touch.

This might be cheating, I don’t know, but I had hoped to read and finish this before the Reading Rush even began but that didn’t happen. I’d only read the first chapter before Monday so I decided this could fill the prompt of “first book you touch” as it technically was the first e-book I clicked on that day.

I was in a reading mood on Monday because I also started The Fixer by Jennifer Lynn Barnes and read 201 pages. I considered just finishing this in it’s entirety because I could not put it down but it was late, I was really tired and I was also loving it so much that I kind of wanted to stretch it out another day.

On Tuesday I eventually got around to finishing The Fixer by Jennifer Lynn Barnes after a fair few hours of procrastination, while also eating fish finger sandwich. It was an

afternoon well spent. (It also prompted me to say “Thank the lord, we have fish fingers” which is weird even for me).

Completing this book filled the challenge for: Read a book that’s the same colour as your birthstone. I was born in August so my birthstone is Peridot which is a green colour. The Fixer is more of a teal-ish colour but it’s on the green spectrum and I really wanted to read this so …

I then lapsed into another few hours of procrastination because that’s how I roll before finally settling down in bed (at midnight) to start Carry On by Rainbow Rowell.

I was originally hoping to reach the 200 page mark but it was late, I had to wake up early the next morning for my driving lessons and this book also read a lot slower then I was expecting.

Day 3 was very productive, at least in terms of reading anyways. I’d originally been hoping to get to the halfway point of Carry On. That was my goal. And after going to my driving lesson I got myself into a good rhythm of watching an episode of Criminal Minds (I’m currently re-binging) before then reading a couple of chapters until I reached the 50% mark. 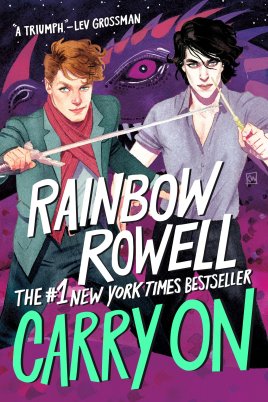 I didn’t think I’d be able to read anymore after this as later that night we picked my dad up. He’s been away working for close to 10 weeks so I wasn’t sure what our plans were. Luckily mum and dad spent the night watching movies meaning I was free to read all night.

I ended up staying awake till 1:30 in the morning , my eyes were literally dead and half closed but I finished!!! This completed the challenge for: Read a book that inspired a movie you’ve already seen.

No you’ve not missed anything. There’s no Carry On movie BUT there are, as we all know, movies for the Harry Potter series which this book is loosely inspired by. To be honest I just wanted an excuse to finally read this book.

My dad woke me up at 8am on Thursday which would have been fine … if I hadn’t been up late finishing Carry On. I was like a walking, barely talking Zombie all morning.

To celebrate the fact that my dad was finally home we went out shopping and for lunch which was nice. My hopes of buying some new shorts crashed and burned when I realised none of the dressing rooms were open for me to try them on but I did get a new t-shirt and some scrunchies.

I also got an early birthday present in the form of new sunglasses. My dad’s a total sunglasses snob and he’s been wanting to get me some forever and so for my impending 18th he got me a pair of RayBans which I love (but am terrified I’m going to break).

When we got home, instead of reading like I should have, I binged the second half of Criminal Minds season 3. At around midnight I did finally curl up in bed and began reading The Falling in Love Montage by Ciara Smyth but I didn’t get far before I started falling asleep. (Because of the early wake up. Not because of the book).

Pages read: barely anything. I don’t actually know the exact amount because my kindle is stupid and says I’m on page 438 of 4915 which is clearly wrong.

To be honest I barely remember anything about Friday day besides the fact that I woke up surrounded by my snoring dogs, spent the majority of the day watching Criminal

Minds and sweating my arse off but to be honest that’s how I spend all my days at the minute.

Friday night, however, was much more memorable. We continued on with the “yay dad’s home” celebrations and we went for a couple of drinks at the bar I work before going and getting a curry. We ate a lotttt and then had to make our way up a giant ass hill to get home.

While my parents fell asleep on the sofa I sat and finished The Falling in Love Montage fulfilling the challenge of: Read a book that starts with the word “The”. I’d read another 10% of the book earlier that day but I still had over half to go so I’m very pleased I finished this. It helped that I loved this book and couldn’t put it down.

The weekend passed uneventfully as ever. On Saturday I made brownies after my brother practically begged me for two days straight and I started reading The Kings of Bones and Ashes by J.D Horn. This would have completed the challenge for Read a book set in another continent, however I ended up DNF-ing this book at 26%. I really wanted to like this, it’s all about witches in New Orleans, but I was confused and not invested enough to carry on. 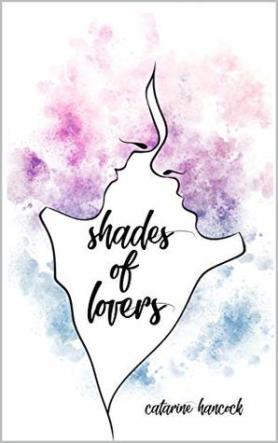 Later that night (aka past midnight) I picked up a poetry collection called Shades of Love  I was really enjoying this and I got over halfway through before falling asleep.

On Sunday I picked up where I left off the night before and ended up finishing Shades of Love by Catarine Hancock which completed the challenge of: Read a book in a genre you’ve always wanted to read more of. This was poetry. I want to read more poetry.

And then from there I sadly didn’t have time to read anything else because I had to go to work and then after my shift I once again hung around and started on the pints before heading home and belting out a performance of Bohemian Rhapsody with my dad while using a remote control as a microphone. Fun times.

I’ve had a lot of fun this week and I’m really happy with how much I managed to read. I’m also happy that I only had one dud out of the bunch.

I’d love to know how your week of reading went and what you read! Let me know:)  Thank you for reading and stay safe!!

2 thoughts on “I exceeded my own expectations! // Reading Rush Wrap Up”